You are a Merfolk, and in a tale as tragic as the ocean is blue, you have fallen for a landwalker. The time now approaches when you can meet again, though the journey will be difficult for both of you. What must you do to make it to your love, and how will they react when you reach them?

IMAGES: Screenshots of the game text.

In order to download this game you must purchase it at or above the minimum price of $3 USD. You will get access to the following files:

I really enjoyed my solo playthrough! Finally a solo that isn't too journaly, has a specific theme, and a nice little twist: I love the prompt/mad lib idea. In my play, I discovered that my setting was in the Sea of Japan, that my mermaid believed landwalkers should be treated with respect because they were "made in an image closer to God," was horrified when she realized that her deafening screech did in fact deafen some unwitting deep-sea divers she was trying to protect from an ancient Kraken, got her arms striped by some jellyfish in her attempt to help some dolphins (and her healing tears could only do so much), told a storm to go to sleep, removed the Key of Atlantis, and ultimately said Yes to her landlover.

Anyhoot, it's the little moments of inspiration that always make solos fun. Like, even though the encounters and prompts didn't write this for me, I discovered the setting on my own and that little tidbit of merfolk psychology and their relationship to "landwalkers." Both unexpected, both pleasant nonetheless.

In short, thank you for this little gem, and keep up the good work!

wow, what a sea voyage!

I’m so glad you enjoyed, I’d never seen a mad lib game before.

Thank you so much for the kind words, I will! 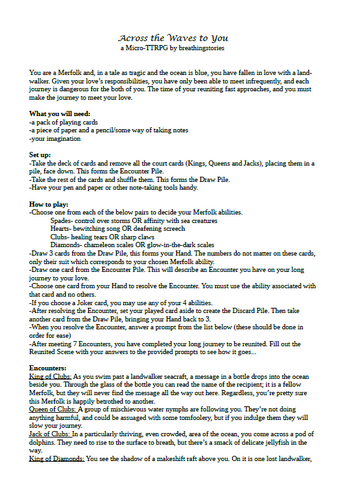 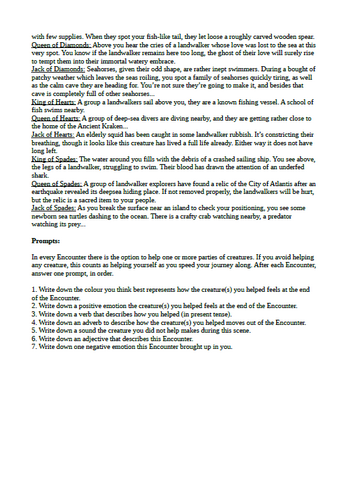 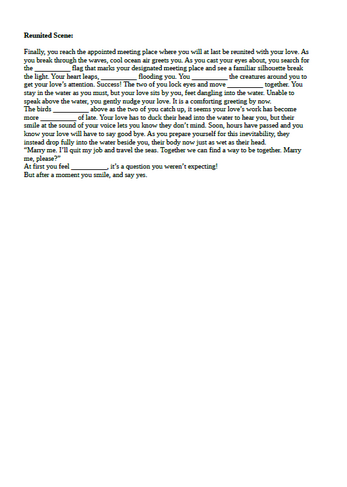